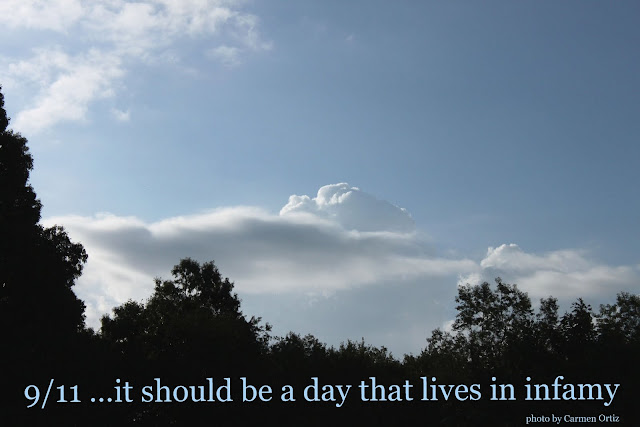 9/11 - It should be a day that lives in infamy.
Words spoken by Chuck Scarsborough, an anchor for New York Nightly News. So true!
It’s the 10th anniversary of the 9/11/01 tragedy. I am writing this post because I want to express my compassion to those who had to endure such evil. I will NEVER FORGET what happened to so many innocent people on 9/11/01. It was difficult writing this post. Had several starts and stops…overcome by tears as I relived what happened to so many innocent people.
Where was I on that day? I was sitting at my desk working when someone in the office said that a plane crashed into the . I stopped working and went online immediately to check out what he just said. Everyone in the department then gathered together to talk of what they just heard. The company set up a large TV in the conference room so that all employees could stop in and view the news.
I am very fond of . Love the high energy of the city. I worked there for a few years (midtown and wall street area). I don’t know anyone specifically that died from 9/11, but being a New Yorker (work related), I feel a connection.
Here is a video timeline of the events of this sad day.
9/11 (What Happened That Day / Timeline)
You can also check out this site for timeline facts and information.
Before the 9/11/01 tragedy… Photos of the .
Photography by Joel. Flickr profile name: JRABX Aftermath of the planes hitting the twin towers that imploded on 9/11/01.
Photography by Steve. Flickr profile name: Loco Steve 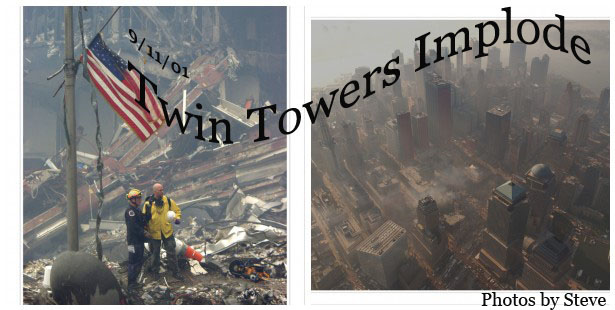 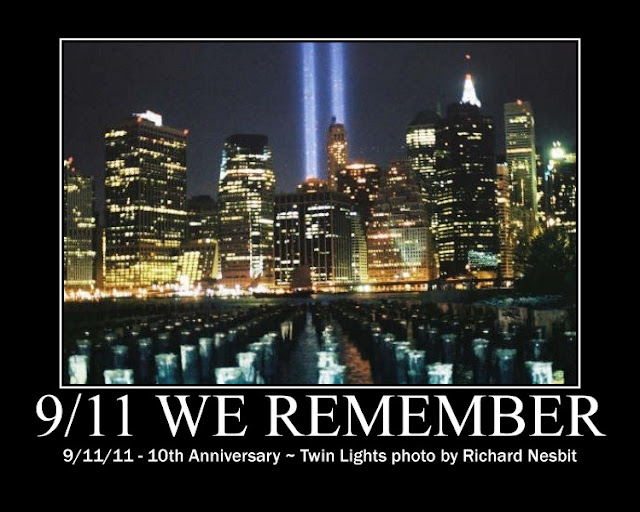 Fortunately, the mastermind behind all this evil is now dead. I won’t even mention his name in my post. I want to say, THANK YOU NAVY SEALS for a JOB WELL DONE! 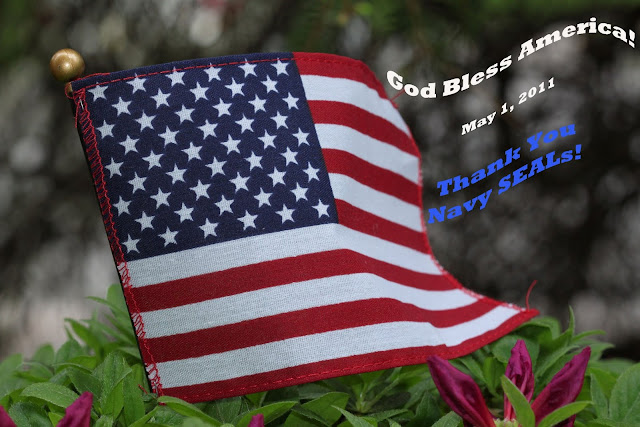 There are many 9/11 memorials honoring those who have perished from this senseless act.
Here is a list of selected 9/11 memorials in .
(Listed by county, where information was available.)
While in Atlantic with my friend Larry in 2009, he showed me the
911 Memorial at Scenic Overlook in .
Adress:

, ,
's 9/11 Memorial has three symbolic components:
~ a timeline walkway to recollect the day’s events;
~ a stone base carved with the names, ages and hometowns of the county residents who lost their lives;
~ and an eagle sculpture with a beam from one of the fallen towers 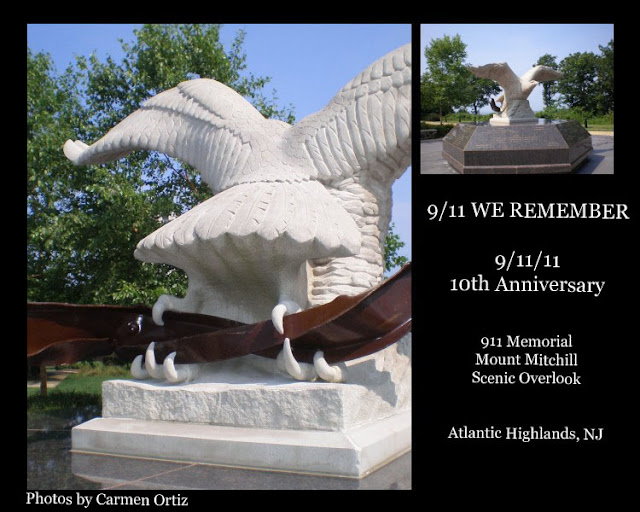 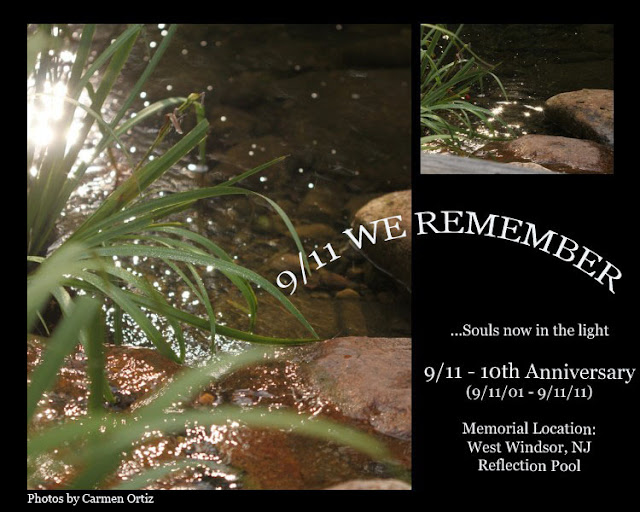 This location has a waterfall and reflection pools.
There are also benches to sit and reflect.
This is a such a beautifully designed memorial site.
Location: Ronald R. Rogers Arboretum
Address:
Corner of and Route 571, 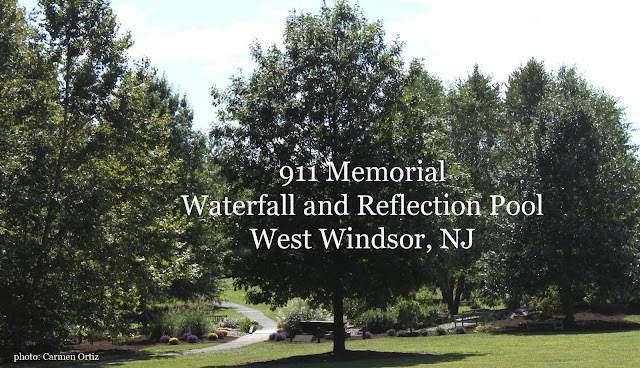 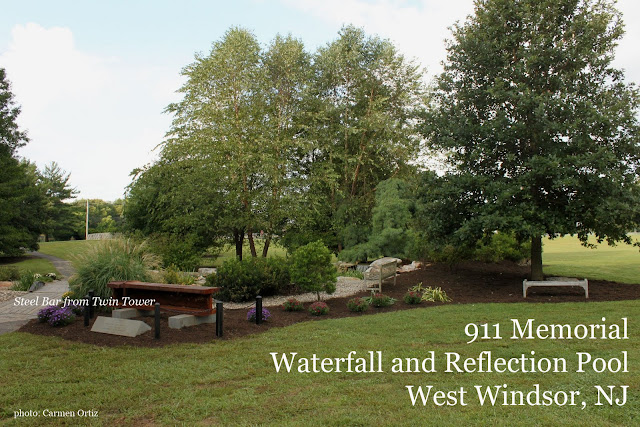 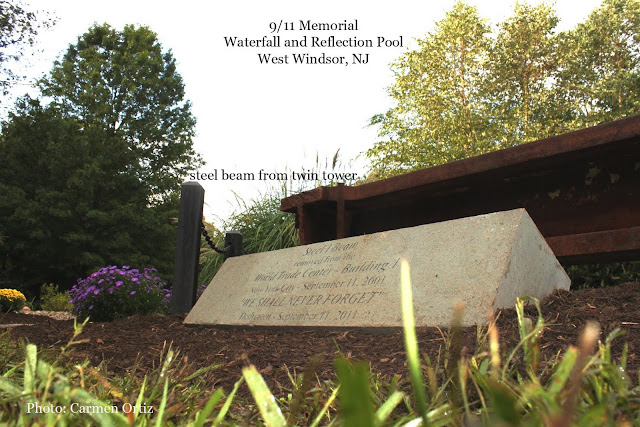 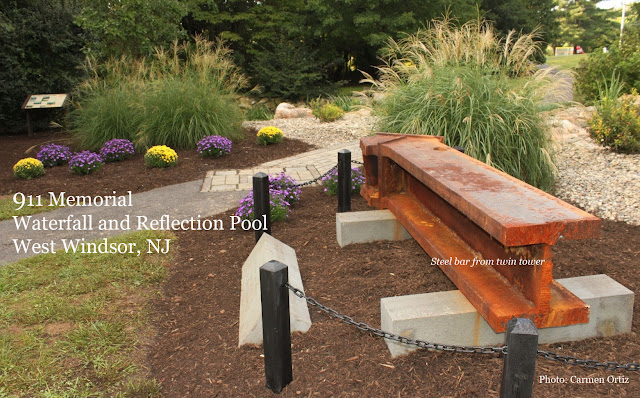 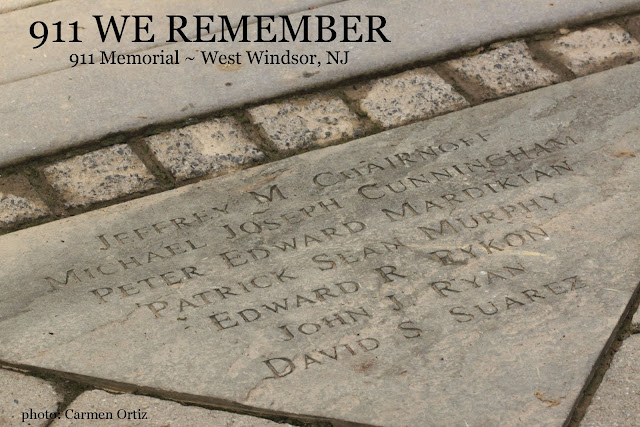 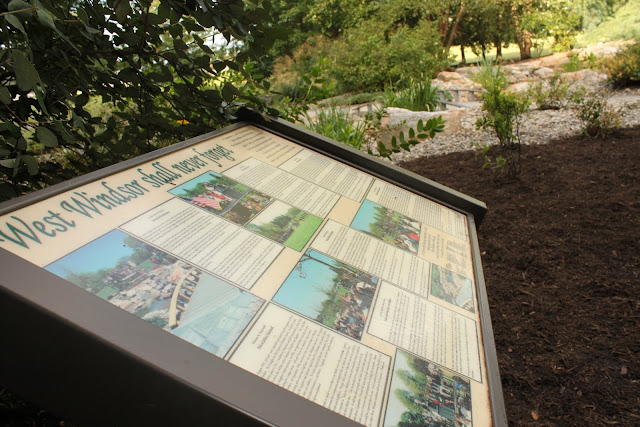 As I took a picture of the dedication board, I saw and felt the gentleness of a single brown leaf softly fall to the ground from above and landed at my feet. 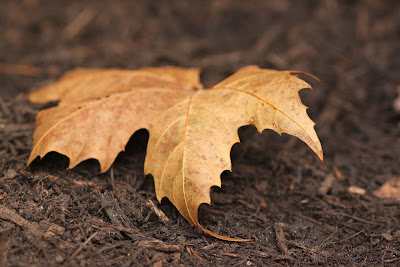 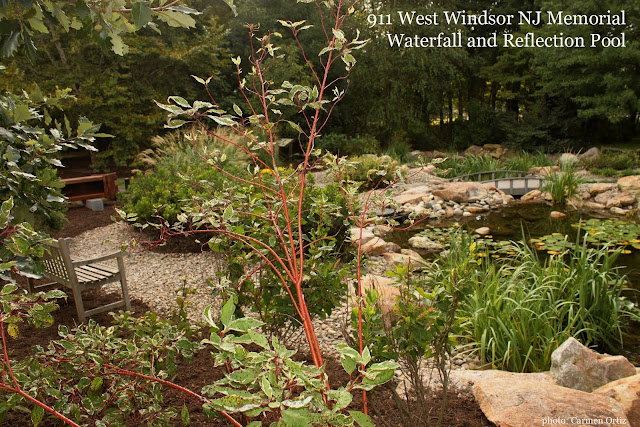 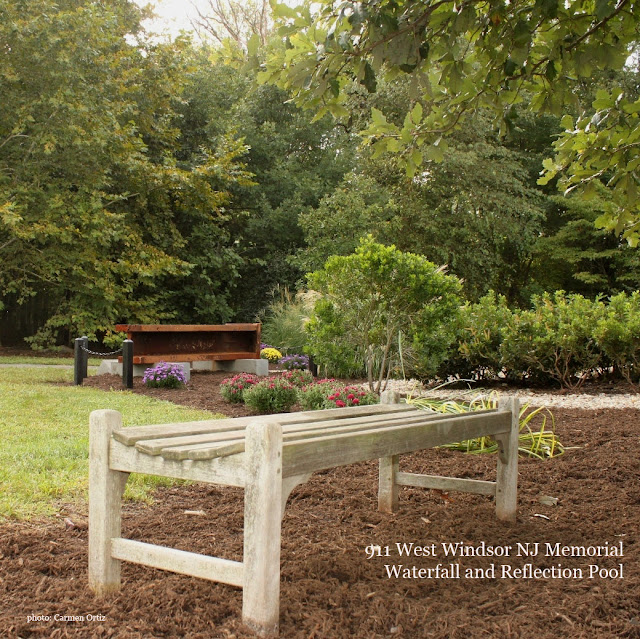 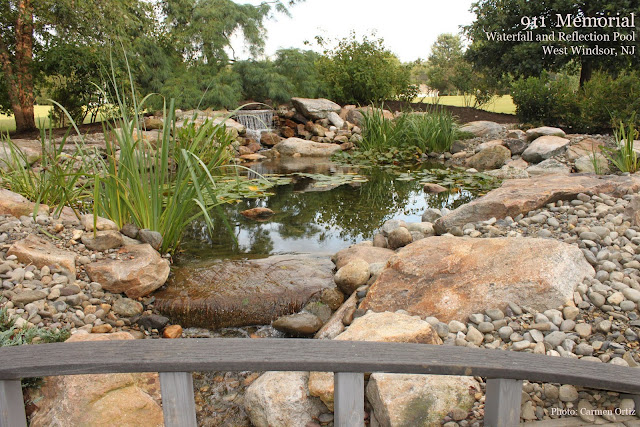 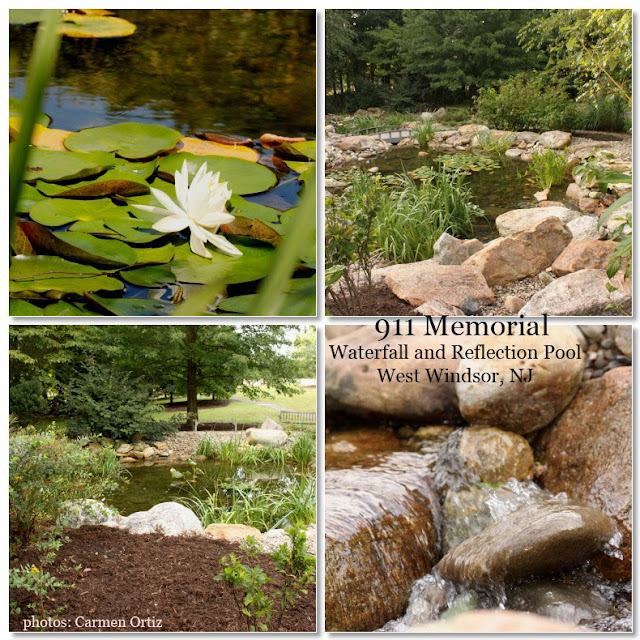 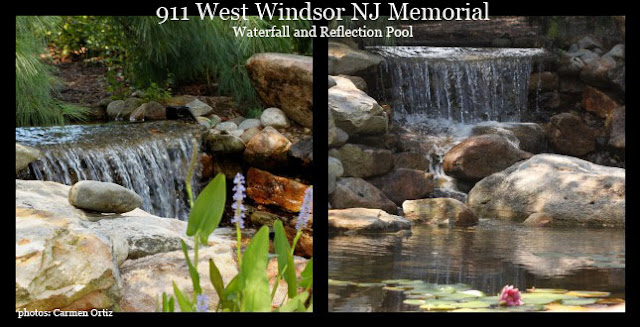 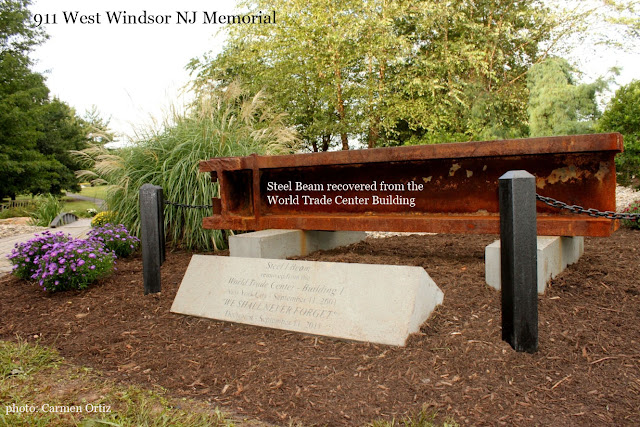 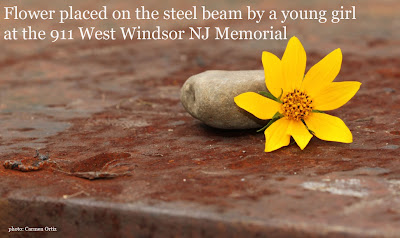 Please take a moment to LISTEN and WATCH a beautiful music video honoring those lost on 9/11/01.
Diane Riegel sings this song with a depth that reflects the sense of never forgetting those that died.
Thank you Diane for sharing your blessed talent!
9/11 Tribute September 11 Song -
"Remember Us" / My Country 'Tis of Thee 10th Anniversary 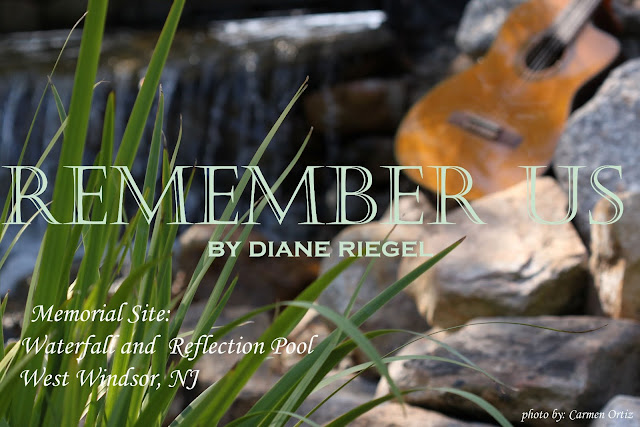 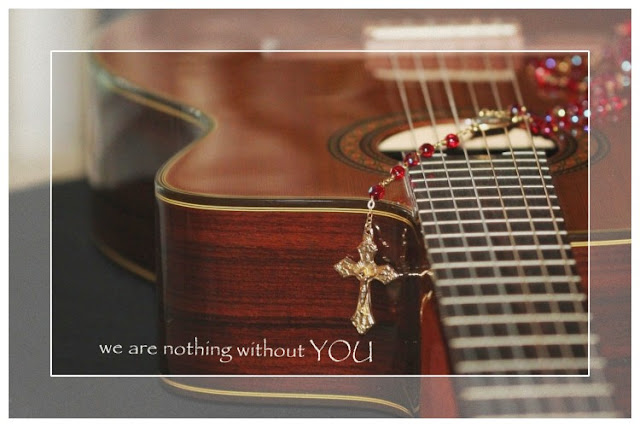 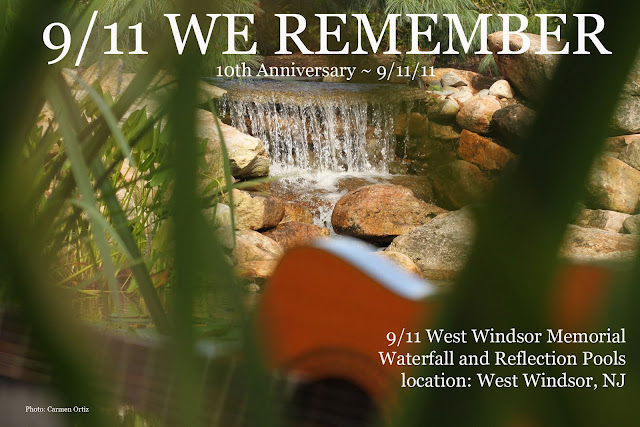